The Northern Ireland Statistics and Research Agency (NISRA) has today published a bulletin on Excess winter mortality provisional statistics for 2019/20.

The report on Excess Winter Mortality includes information on the provisional number of deaths that took place in Northern Ireland in the winter months of December 2019 to March 2020, compared with the non-winter months (including the preceding August to November 2019 and the following April to July 2020). 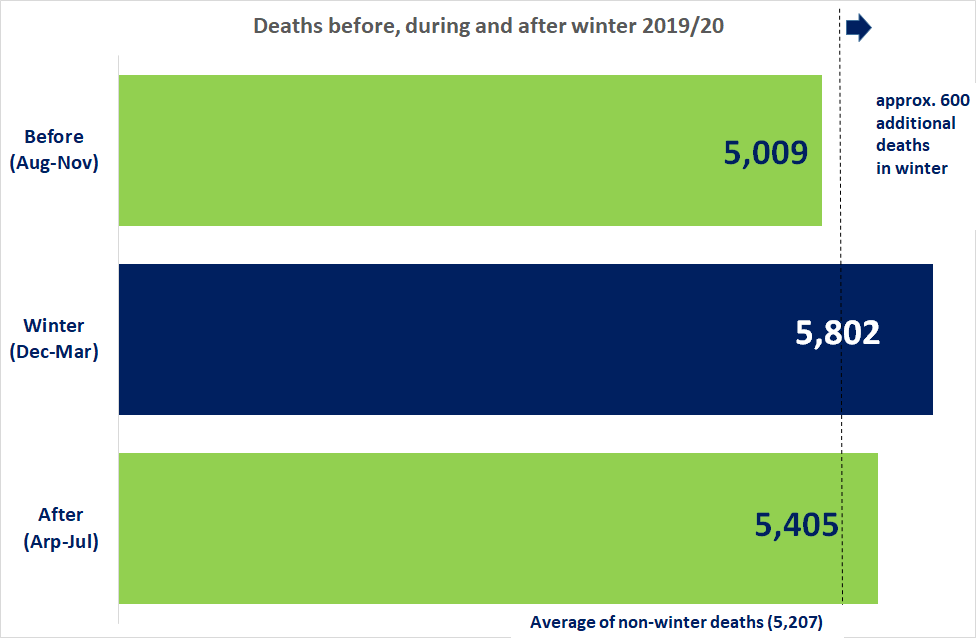 There were 5,802 deaths in Northern Ireland in the four months of winter 2019/20 (December to March). Comparing this with the average for the two adjacent 4-month periods, the seasonal increase in mortality in winter 2019/20 was an estimated 600. This was 40 more than the corresponding value of 560 for the previous winter (2018/19) but was one of the lowest levels of EWM in the last ten winters.

The full impact of Covid-19 on mortality in Northern Ireland is still unfolding, but we can approximate what the excess winter mortality would have been if the pandemic had not happened, by removing all deaths where Covid-19 was the underlying cause of death from the analysis and re-calculating EWM.  This results in the estimate of excess winter mortality for 2019/20 increasing to 910, which is more in line with estimates for previous years. (This is because the effect of Covid-19 in 2020 was to inflate the number of deaths usually seen in the non-winter period, particularly April to July, which in turn has led to a winter seasonal increase (600) that was lower than usual.)

Respiratory diseases (not including Covid-19) continued to be the leading cause of excess winter deaths, accounting for 51.7 per cent of the excess winter mortality in 2019/20.